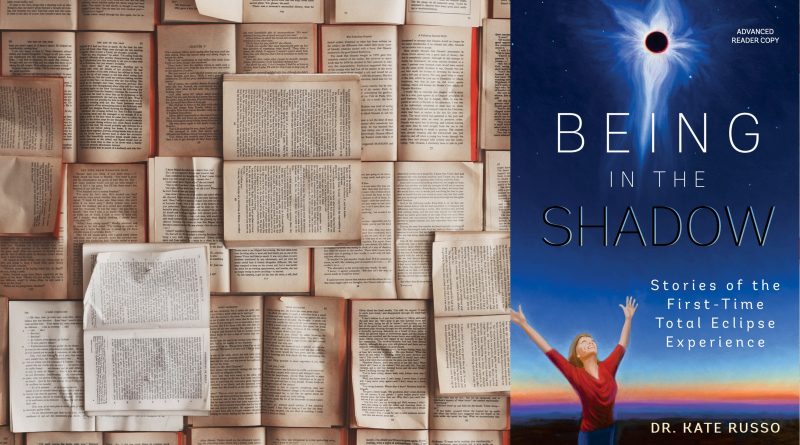 Total Solar Eclipses are not about science or astronomy, they’re about people. That’s the key takeaway from a new book by eclipse-chasing psychologist Dr. Kate Russo (www.beingintheshadow.com & @beingintheshadow), who’s weaved together some gripping accounts of how people feel before, during and after their first glimpse of totality.

Being in the Shadow: Stories of the First Time Total Eclipse Experience really stuck a chord with me. The interviews that inform the book were all conducted around a Total Solar Eclipse in 2012 in Far North Queensland. Although I had seen eclipses before 2012, they had always been under cloud; the 2012 eclipse was the first time I experienced Totality.

Russo documents the eclipse through the eyes of six people, but it’s a character called Cara’s that is perhaps the most riveting. Not just for her eloquent descriptions, but for her husband’s unexpected panic about whether or not to look directly at the Sun during Totality. Looking at a totally eclipsed Sun – that “glowing ember of bluish silver light” – is perfectly safe; it’s no brighter than a Full Moon, yet repeated warnings from the lazy local media in the run-up to the eclipse had left him with an inner turmoil. Thankfully, Cara had done her research, and knew when it was safe to look. That’s a good lesson for every prospective eclipse-chaser.

Cara got something I can relate to each time I’ve experienced totality; a overwhelming desperation to experience it again, as soon as possible. Another case study, Tabitha, describes totality as surprisingly sudden, dramatic, and intense. For her, totality looked absurd and unreal, like a moving oil painting, but what followed is something that always happens, even in a big crowd; silence.

“As everyone retreated into their own experience, things went quiet,” writes Russo. “The sun wrapped its arms around her and touched her to the core.”

However, my favourite passage of the book comes soon after her experience of totality as Tabitha insists on thanking the Moon. “She wanted to give her full adoration and respect to the Moon for what it had given her,” writes Russo. “Keeping the Moon company” as it moved away from the Sun might sound like an odd response to seeing Totality, but I can definitely relate to that. After all, it may be called a Total Solar Eclipse, but it’s the Moon that’s doing all the work. So on August 21 I will be watching the New Moon’s disk until Fourth Contact when it kisses the Sun goodbye.

Russo finds plenty of common experiences of totality (aside form everyone being unable to say anything more than ‘whoaaaa’ at the big moment). Everyone seems to notice the changing quality of the light and totality’s unexpected colours; all the protagonists in the book take note of the ‘upside-down sunrise sky’, the silvery blues, and seeing colours that just don’t exist at any other time.

A sense of immense energy is also a common feeling, but also a euphoric yet comforting connection to the Universe, a strange respect for the Sun, and a sense of peace. The time-freeze, too: “The rest of the world no longer existed. Time had stopped, and those two minutes felt like a lifetime.”

After seeing totality everyone asks the question that’s at the root for this very website: when is the next eclipse? However, the accounts in Russo’s book of the majesty and downright bizarre events of totality suggests that another, more pressing question is on the minds of observers the moment that totality ceases: did that really happen?

This unusual and useful delve into the psychological response to totality is arguably much more important that the drier scientific takes on the topic. Anyone planning on getting their first glance of totality on August 21, 2017 in the USA will get a unique insight from Being in the Shadow into what they’re about to experience.

Find out more about Being in the Shadow: Stories of the First Time Total Eclipse Experience